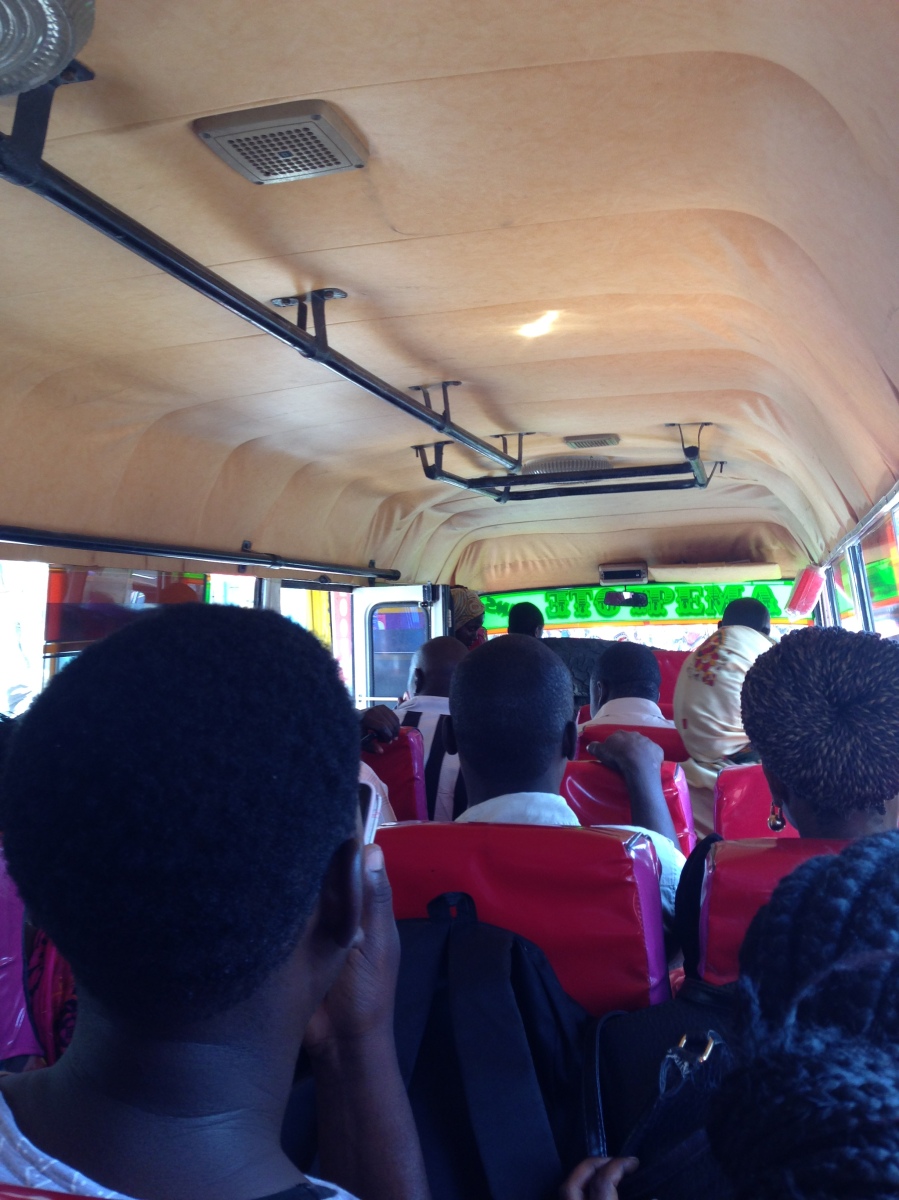 We got back from safari and went straight into our first real work week. So this week has been awesome.

I woke up on Tuesday feeling uneasy. Nuri and I were going to MikonoYetu for our first real day of routine work, but before heading all the way out to Buswelu (where the MikonoYetu centre is) we planned to visit a couple of potential venues for our event in August. On our way to the first venue, we passed by the office where we booked our safari. Jibraan, who owns the travel company, saw us passing and invited us in. We chatted about how our safari went (my response: “we saw animals”), Ramadan, and where to get good food after 6:30 pm. We were there longer than I had budgeted, in terms of time.

I try to embrace “Tanzanian time.” I appreciate the “pole pole” kind of thinking, and have really tried to go with it. I love that real interaction and conversation trumps personal time limits and agendas here. But I was anxious that morning because I felt like I was going to MikonoYetu with nothing to show. I had nothing to offer Maimuna, not even a clear understanding of what she wanted. So when we had been there for about half an hour, I slipped into the conversation that we should probably get going. Jibraan asked where we were headed today. We told him our plans, and Samira took the opportunity to ask if there was an office we could stop by at the first venue we were going to inquire about. Jibraan picks up his phone and makes a call. Soon enough I’m on the phone with one of the board members for the venue, and he’s telling me to stop by his shop (which was a couple of blocks away) to chat with him about our event. Hemal was more than helpful, booked off the dates we requested, and didn’t even seem frustrated that I didn’t know the answers to most of his questions. Pricing is flexible since it’s a charity event, the space is perfect, and they’d be happy to work with us. Maimuna was happy with the space and willing to take Hemal’s advice to shift the dates a bit. One half hour conversation and a couple of helpful, connected friends later, I had more to bring to the table than I ever thought I would have.

Venue, check. And not how I expected.

Since Samira and Iris are going to have their hands full getting the yogurt kitchen at SAUT up and running this summer, Nuri and I will be working on the MikonoYetu and EBLI projects together. The company while travelling and the combined brain power make splitting our time more than worth it. Tuesday was our first real work day, as I mentioned above, so after grabbing lunch we made our way to the dala dala stand to catch a dala dala to Buswelu for an afternoon working at MikonoYetu. By ourselves. This was the first time we were walking to the dala dala stand without Kato, the first time we didn’t have Samira to speak Swahili for us, and the first time riding the dala dala as a pair, as opposed to a group of four.

We did well. The independence was encouraging, and I think exactly what we needed. We walked to the dala dala stand (probably about a 20-minute walk, but I’ve never actually timed it), and reasoned the entire way that no one was out to get us, and if all else fails we can just chirp “Buswelu?” and hope that someone helps us. We were super ready for this. We had to be ready, we’ll be doing this multiple times every week.

We got to the stand and stood there, having no idea what to do. Luckily, a nice albino man who spoke a bit of English gave us a hand: “Sister, where are you going?” We got on the right dala dala and made our way to MikonoYetu. We got off at the right stop. I made a point of not texting Maimuna that we had arrived so that she wouldn’t send Miraji to bring us from the stop to the centre. Nuri and I wanted to make it there completely by ourselves.

The independence was great.

The meeting at MikonoYetu went well. We filled Maimuna in, I showed her the letter I’d drafted for partners and sponsors, we looked at some branding options for the event that Iris had cooked up, and Nuri made me talk to Maimuna about when I’d be starting my other project (I had vented to her about my frustration earlier). Apparently I can start interviewing whenever, she had a few women in mind and there would definitely be more as the summer wore on. I finally felt like I was accomplishing things and connecting with the projects and the MikonoYetu team.

And I finally had enough things to do to make a few to do lists. It felt so good to have tasks laid out in front of me.

Nuri and I took the dala dala back to town without incident, and were excited to have things to do and were looking forward to a quieter day on Wednesday (Maimuna told me I could work from home). We picked up some fruit for dinner and buckled down to get a few things done. I spent the rest of the night picking out courses for next year and engineering my academic schedule in preparation for course registration soon (another thing to knock off the to do list, which was awesome).

I had no motivation today (Wednesday). Nuri and I hung out in my room this morning (her fan is broken, which in this heat is a problem). I had windows opened up on my laptop, showing me all the things I should’ve been working on. I didn’t get much of it done. It wasn’t exactly a bad morning; I looked up a few more courses for next year, chatted with Nuri about fasting, sent off some emails, and ended up researching some graduate programs (ultimate stalling, grad school is in the further future for me). At quarter after 12:00, Samira texted me telling us to come downstairs. They were waiting. We had said that we’d go out and run some errands at noon. Nuri bought a phone to put her SIM card in, we took out money to pay rent for this month, and I stopped to speak with Hemal to confirm booking the venue.

Nothing special. Iris and I chatted about Mwanza feeling more familiar now, and how we’re definitely more comfortable with our surroundings. We passed by people that stared, spoke to us, remarked on our foreign-ness, or begged.

So when a couple of street kids badgered us on a busier street, I kept walking. But then they grabbed my arm.

I have resolved to not give anything to every single street kid out there. It breaks my heart to see them, but giving a few hundred shillings to a boy on the street is more likely to keep him on the street. I’m focusing my resources on more sustainable projects.

I help when I have food, or something in my pocket so taking money out won’t potentially put me in danger (I’m not about to go fishing for my wallet when surrounded by street kids). I try to be pleasant to these children, and not treat them like pests. I pray for them and hope that any small acts that I do commit have a positive impact on whomever I give to.

These two boys grabbed my arm and kept walking with me, though. I was surprised, but more surprised afterwards with how calm I was. I repeated “hapana” and “pole” (“no” and “sorry” in Swahili), and pulled my arm away gently every time they grasped it. A white arm. A part of a person that represents wealth and probably inequality.

I understand why it happened. If I’m honest, I’m surprised it took three and a half weeks for something like this to occur. But I don’t really want it to happen again.

The rest of the day passed pretty uneventfully. I stalled some more, did a bit of work, and have officially resolved to be more productive tomorrow.

This evening was the first evening of interviews for this coming year’s WHE fundraising and education executive committee. As one of the co-chairs for the committee, I’m putting the new team together along with my fellow co-chair, Nafisa. So come 5:45 pm, I made my way to the hallway where I know I get better wifi than in my room.

Of course the wifi wouldn’t connect.

I am very privileged to have fast and reliable internet access in Canada. I am very privileged to have internet access in Canada in general. I’m also very blessed to have internet access at the hostel. But when I have an interview scheduled for 6:00 (11:00 am Eastern Standard Time) and I can’t even tell Nafisa to go ahead with the interview because my laptop won’t reliably connect to the wifi, it’s a little trying. I missed the first two interviews. Nafisa was a champ and went ahead with them on schedule, filling me in later. Luckily Iris got a hefty data package for her phone a few weeks ago. I crashed in her room and leeched off of her phone hotspot for the next two interviews. I felt bad and owe Iris for helping me out, but amidst the frantic clicking to connect to the hostel’s wifi, I did have some time to reflect on something: pace.

I’m your typical firstborn, type A perfectionist. I like things done the right way (i.e. my way), preferably by me, and on schedule. I’m anxious and easily stressed.

So what am I doing in Mwanza?

Maybe because I’ve bought into the isolated, workaholic, often cut-throat way of thinking that our North American society reproduces. Sure our economy is more advanced, but would I have ever stopped and chatted with Jibraan, and in turn gotten in contact with the very person I needed to speak to that morning, in Canada?

Probably not. Things just fell into place, because I begrudgingly followed Samira and Nuri into the travel office when I wanted to keep going.

We’ll see what the rest of the week holds.

One thought on “Ups and Downs”

About Western Heads East Western Heads East is a collaboration between Western University in London, Canada, and African partners using probiotic food to contribute to health and sustainable development. Largely through probiotic yoghurt social enterprises, the program is established in underserviced areas of Sub-Saharan Africa to address HIV/AIDS, health, empowerment of women, and economic development. For more information, visit www.westernheadseast.ca